Embryogenesis and resultant organ development is a tightly controlled process intrinsically programmed into the genomes of organisms. During mid-gestation mouse development, the embryo develops all of the structures, anlagen, and cell-types that are required to form a fully-functional organism. Many essential protein-coding genes (mRNAs) have been analyzed in the mouse which control these essential processes, unraveling core gene-regulatory networks required to properly develop organs. In fact, these identical gene networks are often mis-regulated in various human genetic disorders. 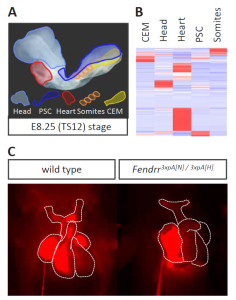 More recently, thousands of non-protein coding transcripts (long non-coding RNAs, lncRNAs) have been identified, and these are now recognized as also being important regulators of embryo morphogenesis. We have identified hundreds of lncRNA coding genes which are differentially expressed in the early mouse embryo, each with a potential role in embryo and organ development, and have shown using genetic ablation experiments that defects in organ development can result from loss of tissue-specific lncRNAs – including within the heart. Our group is currently using state-of-the-art genome engineering (e.g. BAC transgenes, CRISPR/Cas9) in mouse embryonic stem cells to generate transgenic models and in vitro culture systems to understand the functional roles of lncRNAs in early mouse organ development.

If you want to know more, please head over to our website at grotelab.wordpress.com