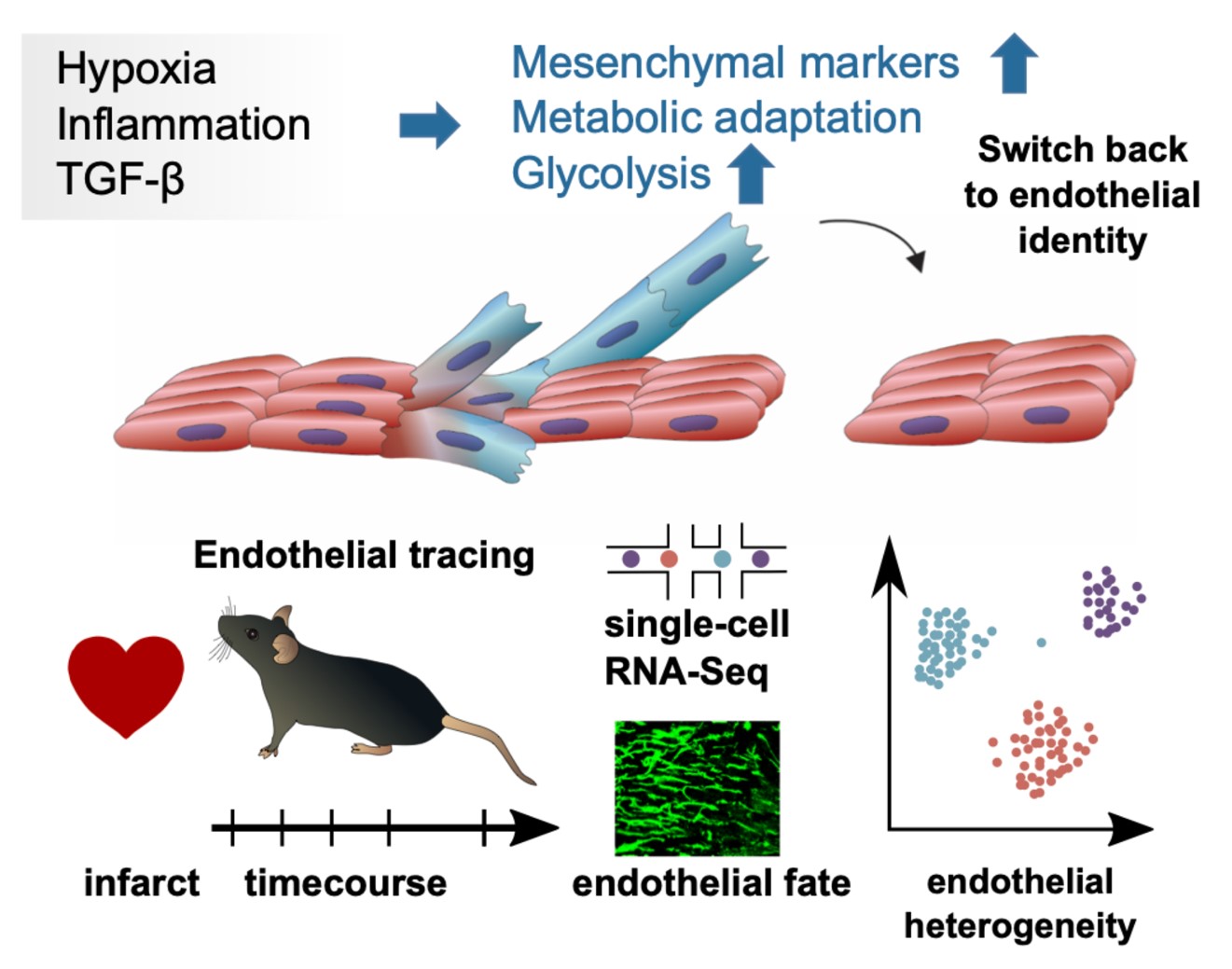 Endothelial cells show a remarkable plasticity after myocardial infarction and have critical roles in tissue adaption upon injury. In this study, appearing in Nature Communications we used single-cell RNA sequencing together with in vivo tracing methods to decipher cellular heterogenity. Remarkably, endothelial cells show a transient mesenchymal phenotype within the first days upon myocardial infarction. However, at later stages, these cells do not acquire a long-term mesenchymal fate. Hence, we termed this process EndMA (Endothelial to Mesenchymal Activation) which might be required for facilitating tissue regeneration.

The heart has a very dense network of blood vessels and capillaries supporting the high metabolic needs for the cardiac muscle. Under normal conditions endothelial cells play a critical role in e.g. sensing oxygen or signalling molecules, nutrient supply to cardiomyocytes and regulating blood flow. After injury followed by tissue ischema, endothelial cells can clonally expand, adopt their metabolism and migrate. This phenotypic change has been associated with expression of mesenchymal genes, but whether these cells contribute to the pool of fibroblasts in a long term and yet to fibrosis has not been clear.

In this study which appeared in January 2021 in Nature Communications (Tombor et al.) we showed, by using single cell sequencing that endothelial cells transiently express mesenchymal genes after 1-7 days after infarct. This is accompanied by metabolic adaptation, proliferation and TGF-B signalling. By using in vivo endothelial tracing we could show that at later stages cells revert to endothelial and not to mesenchymal fate.  This “activation” (EndMA) is notably different to other examples where cells undergo a complete transition, such as epithelial to mesenchymal transition or valve morphogenesis. Using in vitro models we could mimick this reverting phenotype by simple withdrawal of  TGF-B. Epigenetically, DNA methylation patterns were also transiently changed, suggesting that endothelial cells do not undergo true fate changes.

Understanding long-term changes in interstitial cells in the heart is an important factor for development of future therapeutic interventions after cardiac injury. To which extend EndMA could also occur in other disease conditions should be investigated in further studies.